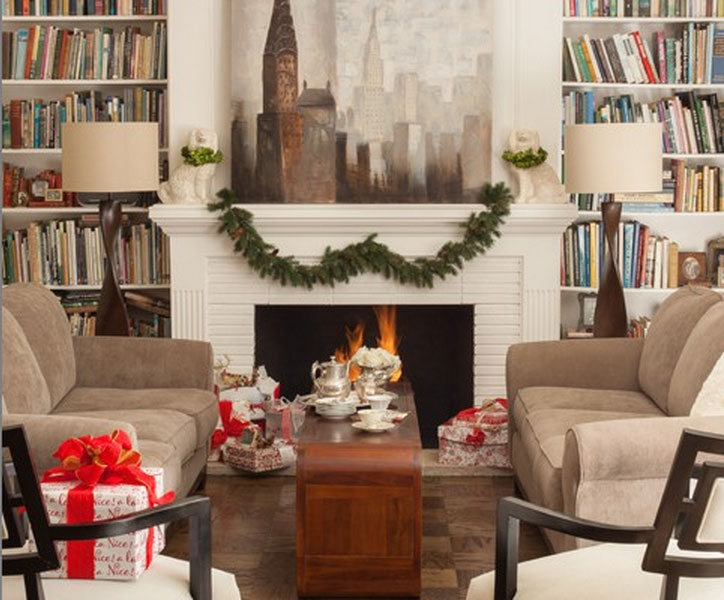 Home for the Holidays

Story by Leslie A. Westbrook, photographs by Erin Feinblatt

“Anne has an extraordinary natural instinct for designing a house,” physicist and scientific balloon designer Julian Nott proudly announces in his warm British accent, referring to artist and antique dealer Anne Luther, who he has been with for over 25 years.

Nott and Luther honor other English Christmas traditions by hosting lunch on Boxing Day and formal holiday dinners that include turkey, ham, Brussels sprouts and pudding, with guests pulling symbolic silver charms and coins from a bowl (instead of baking them into the pudding) for good luck or “forecasts” of the year ahead.

The couple met in New York and moved west in 2000; they haven’t looked back since. But Nott’s traditional English roots, combined with Luther’s Manhattan pizzazz, are reflected in their domicile.

“This is what I wanted for us. A place that is bright and airy, but also cozy,” says Luther, a native of New York City’s Murray Hill who landed in Carriage Hill, a former fruit orchard bordering Hope Ranch that was designed and developed in 1965 by Herb Braun.

The original farmhouse, built in 1928, remains in the planned community, as do many of the fruit trees.

Luckily for Luther—collector of all things bright and beautiful—the original architect/developer’s wife, Ellie, also owned many possessions; hence, she required lots of storage space. It’s difficult to imagine that the house had too much storage for Luther’s cornucopia, but, in fact, she tore out a hall closet to make space for an antique dresser and cleverly turned the remainder of the 32”-wide space into a jewel-box-like guest powder room.

The couple bought the approximately 2,500-square-foot three-bedroom and two-and-a-half-bath house (after selling their previous Santa Barbara home) in August 2012. They gutted the house, taking it down to the studs, but kept the original floor plan because Luther fell in love with the flow of the house.

A major remodel was completed just three and a half months later, with Luther acting as interior designer, landscape designer and owner-builder, working with general contractor Haka Builders. She and Nott admitted that they liked their contractor and crew so much, they cried when the job was completed, and it was time to say good-bye.

Luther proudly displays items she has collected over the years, including a vast number of antique ceramic and china pieces (“I’ve never seen a piece of china I don’t like,” she laughs), along with new “finds” purchased from Cabana Home, Summerland Antique Collective, Old Town Antiques and The Antique Center, as well as items that catch her keen eye, discovered at thrift stores and flea markets.

As a scientist and patent-holding inventor of huge balloons—including the design of the first hot air balloon with a pressurized cabin (slated to go to the Smithsonian)—Nott has met Prince Charles and Queen Elizabeth, astronaut Neil Armstrong and aerospace engineer Bert Rutan. He admits that he appreciates living in a house that combines modern conveniences with tradition. Being surrounded by family portraits and personal history, as well as many charming watercolors and prints he has collected that chronicle hot air ballooning of yesteryear, suits him to a T.

“This is the 15th house I’ve done,” claims Luther, not only an ardent collector, but also a talented assemblage artist. “I never buy a property that doesn’t need fixing up. I always want to make my own mark.”

Wisely, she always makes certain to budget enough so that the couple doesn’t have to reside in the house during the remodeling process. In fact, they lived at the Radisson Hotel (now the Hyatt Mar Monte) during construction on this house.

“Choosing the colors was a lot of fun, I think I spent more time on that than anything else,” Luther notes. The colorful palette chosen for the interior walls of the house ranges from terra cotta in the foyer to pale sea glass blue in the master bedroom and sunny Tuscan yellow in the kitchen. The kitchen has a farm sink, antique fireplace tiles collected in England inset above the stove, and Bennington spongeware, cottage ware and yellowware displayed in specially designed cabinets and shelves. Luther’s grandmother started her collection of yellowware, which provided the color cue for the pantry.

The fashion trend of gray (“I would have made the whole house gray”) influenced the two shades of dove gray in the dining room. The darker shade used inside the display cabinets helps showcase an antique Ironstone collection and compliment red dining chairs. Luther’s collection of red transferware is handsomely displayed on an 18th-century Welsh sideboard that has been passed down through several generations of Nott’s family. A pair of ancestral portraits flanks the sideboard. These portraits and cupboard have remained together and passed down through the generations of the Nott family since 1789.

An oil on canvas of the same couple, painted when they were elderly, adds a rather serious accent to the couple’s jazzy living room. On special occasions, Nott creates whimsical cartoon bubbles of imaginative thoughts such as “Bah Humbug!” and “Merry Christmas!” that are added in jest to lighten the mood.

Luther used furnishings from her New York apartment, including a pair of gray sofas, black and white chairs and a painting of the Chrysler building hung above the fireplace in the living room to add a more contemporary feel to the house. She selected neutral linen-color paint for these walls. But Nott’s father’s dresser and a map of his birthplace, Bristol, are also woven into the tapestry of the room.

The couple’s bedroom is a serene and quiet retreat painted in pale sea glass blue with silver accents that overlooks a tranquil patio with gurgling fountain. A silver bedside bowl filled with white antique dolls and lamps made of coral, from Cabana Home, add to the mix. An inviting guest bedroom shares the adjacent outside patio view.

Luther claimed the sunroom for her “neat as a pin” art studio. It’s the kind of room where one might wish to sink into the chintz-covered couch and take a nap while Luther makes art. Her assemblage parts are stored in Mason jars and vintage suitcases. “I can’t work in chaos,” she says, grateful for this space where she expresses her love of antique pine furniture, flowers and “girly things.”

“I love living in this house. Thank you Anne Luther!” Nott enthusiastically announces to both of us, while showing me his memorabilia-filled home office where, when not globe trotting or ballooning high in the sky, he invents.

“It was love at first sight. When I showed him the house, he was surprised,” Luther concludes—a love affair reflected in the couple’s quarter-century relationship, which one ventures to guess—knowing both Nott and Luther’s creative bent—is often filled with surprise and delight and certainly plenty of whimsy!